Dr. Panchal Lab is one of the best sonography centre in Borivali. Founded by a Pathologist in Borivali Dr. Kashish Panchal. which provides the best Sonography, Colour Doppler, 4D & 3D pregnancy sonography, and all pathology tests in Borivali. The diagnostic centre has highly trained and highly qualified radiologist for sonography tests.

What is Ultrasound (sonography)?

An Ultrasound is a Test procedure in which high-frequency sound waves are used to create ‘pictures’ of the inside of the body.

Sonography is a painless and generally affordable investigation widely used by doctors to diagnose a variety of conditions. Ultrasound images are engineered in ‘real-time’, and let us see both the structure of our internal organs. While it has various kinds of medical uses and health applications, an Ultrasound is perhaps the most popular and preferred Test used to monitor the development of the fetus in pregnant women. An individual doesn’t normally have to go through any special preparation to taken a Sonography Test.

What is the Procedure of an Ultrasound at Dr. Panchal lab and diagnostic centre?

An Ultrasound Test is carried out by a Radiologist (Ultrasonologist) who has been specially trained for the purpose. An Ultrasound Test usually takes between 20 minutes to an hour, and normally doesn’t require any special preparation.

Special preparations are required for certain ultrasound procedures Eg. For an Ultrasound of the gall bladder or liver the individual needs to fast or abstain from any kind of eating for several hours before the Ultrasound begins.

A bladder that is full of water is able to generate better pictures or images of the uterus and other organs Therefore, in the case of an Ultrasound for a woman who is pregnant and individuals for lower abdomen ultrasound plenty of water must be drunk – and the individual must be careful not to urinate for some time before the Test.

In the case of an External Ultrasound, the Transducer (a wand-like instrument) is placed over the part of the body (for example, the heart or the abdomen) that needs to be studied and has been administered a lubricating gel before-hand for this purpose. This process is usually free of any kind of pain or discomfort.

If special preparations are required for an ultrasound, they are informed to the patients during the appointment.

How does ultrasound work?

The term ‘Ultrasound’ literally means sounds belonging to a ‘frequency’ that humans are not able to ‘detect’ or hear. For most diagnostic applications, this frequency range lies between  2 and 18 megahertz (MHz). Higher frequencies can generate better Ultrasound image quality but are susceptible to getting absorbed (and therefore, ‘diminished in power’) by the skin and other soft tissues. Lower frequencies can penetrate deeper past the layers of skin & tissues but produce images of a relatively lower resolution and quality.

During the process, the Ultrasound professional (referred to as the ultrasonologist) will hold a wand-like device called the Transducer in his or her hand. The transducer is placed on the patient’s body externally. In some cases, insertion may be done via the rectum (for males) and vagina (for females) and the Transducer in such situations is ‘placed internally’.

Be it external or internal, sound waves are emitted by the machine which travels through the skin and tissue till it reaches a surface that is too dense for it to penetrate further. The sound waves are then reflected back resulting in an image. This image or picture is also sometimes referred to as a Sonogram. Different shades of gray indicate different densities of the reflecting surface inside the body, which can be an organ or an internal structure. 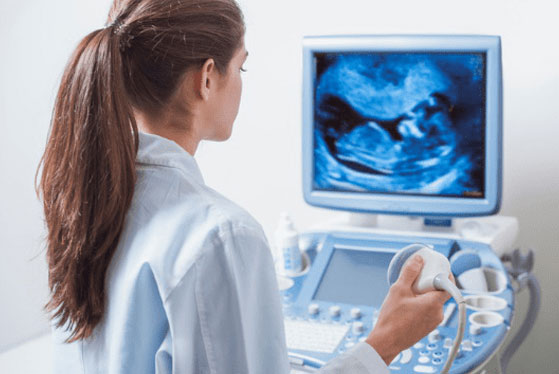 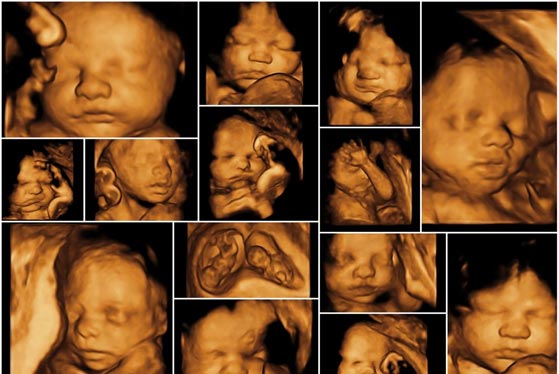 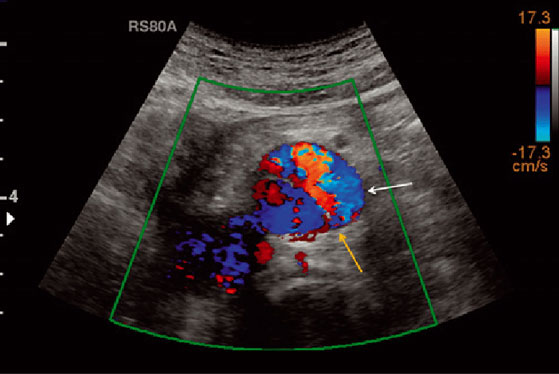